'Oddities & Entities' consists of six stories combining different elements of the horror, supernatural, and paranormal genres.  In this final post regarding the creative aspects of the book, I'll share some hindsight on the book as a whole.

The following excerpts are available in total on my website page devoted to 'Oddities & Entities'.  Check it out at www.rolandallnach.com

For the full book tour, visit my earlier post, or my page at TLC Book Tours.

I've been participating in a voter-driven contest sponsored by 'The Authors Show', entitled '50 Great Writers You Should Be Reading'.  I'm very happy to say that I've entered the finalist round for the 2013 listing. 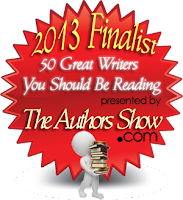 As this contest is driven by on-line voting, I would like to ask your support by voting for me at http://votewinners2013.questionpro.com/

Ah, where to begin?  I think the best place to start with a writer's hindsight perspective for 'Oddities & Entities' is to talk about the sense of location throughout the book.

The stories cover some varied ground.  From the lazy summer evenings of Florida in 'Boneview', to the frigid northern territory of 'Elmer Phelps', to the Pacific shore in 'Gray', to a nightmarish morgue in 'Shift/Change', to a college campus in 'My Other Me' and last to an exotic jungle and globe-hopping memories of 'Appendage', the wide scope of settings was done by design.  I at once wanted to portray experiences in the world that were somewhat different in some of the philosophical interactions of the characters of the distinct stories, and yet present a cohesive message that no matter the locale, other-worldly phenomena are right around the corner.  This also drove the unifying, summary scope of global settings reflected in 'Appendage'.

I believe environment has a profound yet subtle effect on the way we perceive the world around us.  The conditions of our locale can effect our outlook, and perhaps our disposition as well.  Excessive states of climate tend to keep people indoors, and so they have more time to reflect on their station in life.  Likewise, expansive beauty such as the coastal scenery alluded to in 'Gray' and the dismal, depressing dungeon of a decrepit hospital morgue in 'Shift/Change' cause the characters to ponder things beyond themselves.

A sense of locale is also a sense of comfort and security.  It's a common facet of human psychology to think we are who we are because of where we come from, or currently live.  Part of what I wanted to do with the stories of 'Oddities & Entities' was pry into that comfort zone of the characters by jarring their innate security with the introduction of outlandish events.  For example, in 'Elmer Phelps' I wove several symbolic elements of the wintry setting into the story, and let them evolve over the course of the narrative.  The barren cold at first is meant to represent Elmer's isolation, yet in its second phase it fosters the cozy warmth and tender security he finds with Samantha in contrast to the looming threat embodied in Casey's evolving role in the 'agency'.  Likewise - or perhaps in contrast - in 'Boneview' the Curmudgeon is with Allison from her first living breaths, but how she understands its presence in her life changes the way in which she views some of the stranger aspects of the Curmudgeon's existence among the shadows.

Digging a little deeper, I also wanted to portray a simultaneous yet divergent view of the sanctity of the human body itself.  As the stories progress there is at once an increasing disregard for the violence that can mar the living form, and at the same time an increasing appreciation that the vessels in which we live possibly operate under rules we don't understand.  It starts with the apathy of Allison in 'Boneview', demonstrates its first dichotomy in alternate perspectives in 'Shift/Change' and 'My Other Me', and takes a much more pointed - if not graphic - turn in the dark comic gore of 'Gray' and the cannibalistic brain ingestion of 'Elmer Phelps', ultimately culminating in the shape-shifting transcendence in 'Appendage' of Randal from a terminal cancer patient, to mutant arborial hybrid, to a towering tree.

These explorations of how we not only interact and view our physical selves inevitably involved some of the sexual aspects of the stories.  The sexual aspect of the human psyche is a powerful force, yet it can be twisted by life experience.  I didn't want to write stories about deviance.  That may sound ridiculous given the relationship between Elmer and his sister Casey in 'Elmer Phelps', but with this story in particular what I wanted to do was use something very jarring - their taboo relationship - to show the insidious way in which moral standards could be derailed and redefined by the intrusion of a new perception of reality.  I felt it was an effective way to demonstrate how far astray standards can drift.  More to the point, I wanted to craft a thought model for Casey in which her taboo relationship with her brother Elmer is not only forgivable but inevitable.  To make the story work in the way I envisioned it, that relationship was at the core of Elmer's motivations.  It drove his isolation, it drove his inspiration to do something with himself, it fueled his desire for a 'normal' relationship with Samantha and, in the end, in light of Casey's self sacrifice, showed that love itself can indeed be a murky concept.

So, in closing, I'd like to summarize by saying that I didn't write 'Oddities & Entities' with the purpose of waging war on morality.  Rather, I wanted to portray situations that inspire reflection on concepts of right and wrong, just and unjust, and what it means to even have a moral compass.  One of the whispering themes of the book is that morality is both subjective and absolute.  It's not only the challenge of the characters of the various stories, but also a challenge to us as living people, to find a place somewhere between our private morality and a greater, perhaps cosmic, set of principles.

I won't claim these words to be the last things I might say about 'Oddities & Entities'.  In fact, I hope the opposite is the case.  The wonderful thing about being an author is that readers can point out perspectives I as the writer did not see myself.  When that happens, it just opens up another round of thought and discussion.  That, to me, is part of what makes literature so fascinating: words have a life of their own.

Thank you all for following the tour!
Posted by Roland Allnach at 5:50 PM

Places to find me...

Roland Allnach
I am a published author with numerous short stories to my credit, as well as two books. My writing can best be described as depicting somewhat strange people in perhaps stranger situations. The tone may be 'dark', but that does not preclude hope or redemption. Though most of my writing falls within genre material I aspire to the standards of classical literature in terms of complex character development and the allegorical effect of setting. All my published work is availabe at my website, www.rolandallnach.com. I created this blog not only to share my written works, but to sponsor some discussion on various topics as well. I have quite a few interests, and I read a great deal of history, so I've found that there are many topics for discussion. History, you could say, never gets old.